a death in the family.

Caleb’s pet, a plump little goldfish he named “Peanut” passed away yesterday. I think it was something I did, when I cleaned the tank? Because he was fine before, but as soon as I scooped him out with that little green net, he started swimming sideways. That is impressive to watch in Michael Phelps, but not so good in your $4 Walmart fish. The fishnet was stored under our kitchen sink and I think some Windex must’ve leaked onto it…anyway, Peanut swam sideways for about 10 minutes, one flipper going as two little boys watched in horror.
And then Peanut died.

And my baby boy fell apart. 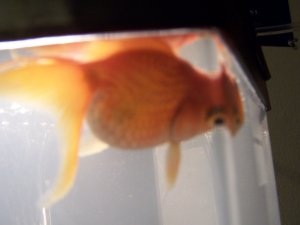 I know it’s morbid to take a photo of a floater. What could I do? Caleb asked for a picture “to remember him by, for he was the best fish. ever.” It is hard to watch your child hurt, even over something minor like a dead fish. With his teary face buried in my neck, I sat there and desperately fought myself not to sing out “We’ll buy you another! Any one you want!” or “Shall we have ice cream tonight?” or “Let’s paint your bedroom!” anything at all, but to somehow distract him, stop his pain, fix it. Because I can’t stand it. Because it hurts to see him hurt. Yet, I know its healthy for him to grieve, and I realized that the only thing that could help my boy was just to hold him and let him cry it out. To gently remind him that this feeling he has? This is why God hates death, too, and why He died, so we could live forever. Caleb sniffily agreed that heaven will be lots better than down here, with sin and death “mucking everything up, all the time!” and then he dramatically stated he would NEVER have a fish again, because it might die, too! I gave him permission to decide that was the safest choice, but also reminded that love for anything-pets OR people-will make you vulnerable to loss. But oh, love and joy are SO worth the risks we take, right? For Caleb had 7 long months of watching Peanut swim, and feeding him and tapping on his tank. And that was pretty great. He agreed, and cried some more.

After he wept for awhile in my lap, then on his Dads…we discussed funeral arrangements. Sam suggested that old classic-“We can flush him down the toilet and sing Amazing Grace!” but Caleb felt Peanut deserved more. I suggested we bury him in the garden. He agreed but requested a coffin “so Zuzu doesn’t eat him. That would be the final injustice.” True.
We fastened some popsicle sticks for the cross. He wrote John 3:16 on the back. Then we found a small box in the recycling for the limp body.
yeah…it’s now Peanut-Butter. (I tried not to laugh.)

And look at this childs face. oh my. Do you see the red rimmed eyes and flushed cheeks from the little boy crying? and can you also see the little man there in the gritted teeth, the firm jaw?

He chose to put his fish right there in the middle, and he asked if he could be the one to plant lots of flowers there. Orange ones, like Peanut.
And holding my hand as we walked out of the garden, Caleb looked up and smiled softly and said, quietly, “I think I would like another fish, Mom.”
and skipping into the house he said
“I’ll call him…Cashew.”

Christian homeschooling mom to three boys, married to my best friend, John, for over 20 years. I love gardening without gloves, learning history with my kids, cooking with lots of butter, serving others, great books, rich coffee, studying the Bible, camping outdoors, scrapbooking, vintage home decor, the smell of rain and cut grass, authentic people, poetry, laughing until your sides hurt, and babies. oh and black licorice is pretty awesome.
View all posts by sparrowjourney →
This entry was posted in son-shine. Bookmark the permalink.

2 Responses to a death in the family.