Posted on December 8, 2009 by sparrowjourney
you see, I am getting something I have always, always wanted. This is one of the blessings of getting older–I have learned how great it is to not get everything you long for, right off the bat. (I know. I got married a few days out of high school. and this might sound odd, coming from the girl whose motto through the ’90s was “Instant gratification takes too long”).

But people can change! For I have come to see a blessing in waiting for stuff.

You appreciate it more, and are so happy when you get what you prayed for-even if it’s something as silly as Storage Space!

Big one? Waiting five years and having two miscarriages before I held my precious Josiah. (and wow-God blessed us with a son again. and then, once more!)
Little desire was driving three babies around in a tiny green minivan and staring longingly after Suburbans for years. (now “Lola” is old, cracked, stained and has a funky smell but she is also roomy, paid for, reliable and still appreciated!)
Big desire was living on a tiny city lot, surrounded by graffiti and gangs and praying for “a bit of earth” and landing on this custom-made-for-us acre of quiet, surrounded by trees and gardens and the P.S. Lord of “just a few chickens?” granted, in full.
I could go on and on but the point of this post was to share my excitement over a little desire, getting filled by Christmas. I get to have a PANTRY.
Now that might be a small thing to some people but it is HUGE, to me! Ask any of my friends who have a pantry-how I interrupt a visit to stand in their kitchens and stare longily at rows of their canned goods.
(” oh, no-thanks. I don’t want your garbanzo beans. Just lusting after your 18 inches of deep shelving and those pretty glass jars full of rice and pasta….”)
Ask my Mom, (who seriously has the biggest, most wonderful walk-in pantry you ever saw!) how I offer to clean and organize it, just for fun, whenever I visit her in California. Ask John, who has had to hear (for 5 years) how our kitchen would be perfect if only there was a pantry and it’s raining hard, so would you mind going out to the pumphouse for a second jar of peanut butter, honey? You know you wouldn’t have to, if….”
(–insert gratitude speech HERE–I want to say thanks to all the men in my life that have made this dream possible-Uncle Deacon, for originally having the idea and putting in a light box 3 years ago, in preparation. John, for giving up a Saturday and messing with plumbimg which I know you hate! And for the best father-in-law I’ve ever had, Lee-for gently pushing your son to git ‘er done, and building the shelves and helping with the whole process. I’d also like to thank the academy…….) 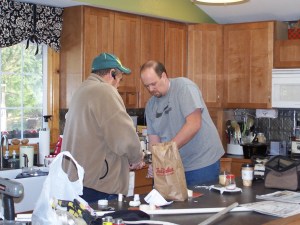 The few times we have bought a house, the first thing I look at is the kitchen and the yard. If those two things are good, who cares about the rest of it? The yard of this house sold me, and it was a gray rainy February, when I saw it! We had walked around the yard first and I made a mental decison-whatever is inside, I can handle it, because I love this property so much. So when we got to look at the kitchen, I looked past the 1960s cabinetry, the pink tile flooring and the flickering flourescent lighting and low ceilings. There was one redeeming quality in this ugly kitchen…I quickly ran over to the little closet in the corner “Oh! Is this a PANTRY?!” I squealed as I opened the bifold doors…and the homeowner smiled apologetically and offered a “well…kind of…” because in that closet was a big old water heater. with two shelves above it. with cans of dog food.

When we remodeled the kitchen a few years ago, Uncle Deacon had suggested running some pipes out the side of the house and setting the water heater up in an enclosed, insulated box, on the back patio. This would

free up that old closet for a pantry, and we could run the refrigerator tubing in, at the same time, in order to get the automatic icemaker functional. At the time, we were already stretched with projects and bills so the idea was set on the backburner for that elusive future called “Later”. Deacon smartly had the electrician tuck a light box up there, for “someday” and I am so glad he did. I wanted a pantry, bad, but I wasn’t whining. I had a skylight and a farm sink and maple cabinets that shone, so I wouldn’t be fussy, asking for more. How long did I go, John? I can’t recall. Did I make it at least six months before I started whining “Why didn’t we do the pantry back when it was all tore up in here?”

It’s been five years, this Summer.I had almost given up hope. I had added bookshelves to the pumphouse and got used to sending a boy out for spaghetti sauce and a fresh roll of paper towels. I became used to plastic ice cube trays, always waiting to be re-filled by the side of the sink. I had adjusted to the realities of my little cottage and stopped, as best I could, coveting the larders of friends.

Then there was a turning point in my fortunes.

In early fall of this year, our home started to stink..bad….was that raw sewage?.
I asked John to check the water heater closet…was a dead mouse caught under there?
but he couldn’t smell anything…
then first thing in the morning (when showers and dishwashers and washing machines began their daily duties) the smell grew stronger. So so that even John started to ask why does it smell like hot garbage in here?
and he had to pull the water heater out, and drain it, and do research on the Internet, and order parts and change out anodes and grow quite frustrated, all while I was burning about $287.00 worth of Glade cinnamon-apple candles, to try and cover the sulphur-like smell of what turned out to be simply our mineral rich water reacting to the aluminim core of the hot water tank. Everything John did, helped. But…you could still (though faintly, now!) smell it, sometimes. The solution simple…it rose up and appeared before us like a bright holiday star…leading the way to peace. and ice cubes…move the water heater outside….yes…tidings of comfort and joy. and mason jars of peaches, lined up in a row…do you hear angels singing? ‘Cause I do….
Tank out. Smell gone. Yay! And now…whatever shall we do with this closet?
John and his Dad started working on it this weekend. The water heater is outdoors, and so far-no leaks! Lee is coming over tomorrow to start on shelves and –bless his heart-he is also putting a few shelves up and over my washer and dryer. Because that is where I keep my stockpot, and extra sheets and the vacuum cleaner accessories and yogurt maker and…what? you don’t? Well, small houses require creativity. and thinking outside the box. and occassional cramming.
So, today I was doing my share to help the project along. I had a long screwdriver and a hammer and I was gently taking out the old wire shelf supports, and a few small 2 by 4s that were left behind. Ok, I was prying at them. Ok, when they didn’t jump out willingly I had to whack ’em. Just a few times. Fine–stop interrogating me!-Yes! I was braced up against the wall and crowbarring them out, muttering “no audio” under my breath and taking out chunks of the sheetrock with the hammer claw! But I got them out, darn it, and that’s what matters, because ONLY in home improvement do I subscribe to the “ends justifying the means” philosophy. Oh, and I might’ve injured myself too, but it was worth it to have bare walls, ready to add shelving at specific height preferences (like exactly how high our Costco jug of olive oil is). I won’t photograph the wound for you but I will say that when I was prying out a 2 x 4 the 14 inch lomh flathead screwdriver slipped hard and stabbed me in the stomach, going right through my t-shirt. When I screamed two boys came running: “Are you okay?!” they gasped and I was panting “I’m fine, just fine” as I checked for blood. 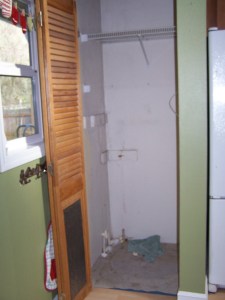 (Thankfully my internal organs were never in critical danger, for I keep a soft padding in that general area, just for circumstances such as this.) Sam asked “What happened?!” and I choked out “Nothing…ouch..I just…oh man…stabbed myself in the gut with a screwdriver and…whoa… yeah, I’m okay…” and Caleb yelled with serious concern “Mom! That is the definition for not okay!” Then Caleb said “I am going to call Dad! And tell him you are in his tools, again!” and Sam added. “and tell him she tried to do the handyman’s version of hari-kari.”
I don’t care. In a few days all of our foodstuffs shall be nestled into their labeled, tidy,semi-gloss white painted shelves.
And you shall find the steel-cut oatmeal, wrapped in glass jars and lying in a closet, in Oregon.

Christian homeschooling mom to three boys, married to my best friend, John, for over 20 years. I love gardening without gloves, learning history with my kids, cooking with lots of butter, serving others, great books, rich coffee, studying the Bible, camping outdoors, scrapbooking, vintage home decor, the smell of rain and cut grass, authentic people, poetry, laughing until your sides hurt, and babies. oh and black licorice is pretty awesome.
View all posts by sparrowjourney →
This entry was posted in family, home improvement. Bookmark the permalink.

1 Response to It’s A Christmas Miracle!